It Seemed Like a Good Idea at the Time


I have been doing the show and art fair circuit for a number of  years now, and like everyone else who is creating and selling to the public, I have discovered that not everything is a good idea. What pops into your head as a great idea or design that you are sure is something that will be the next BIG thing and that everyone will love, is the piece that you end up carrying around for over a year or more with no takers. Now for the record, when I try a new design, I will only make 2 or 3 of them to see if they will sell. If my customers respond, then I will add it to the product line, if not, then I'm not stuck with a lot of unsaleable inventory.

Such as; my rubber duckies.  Who doesn't love a rubber ducky. I found the perfect colored glass, I used my new glass ring saw to cut them out and I kept the design simple, so all the true rubber duckyness would shine through. 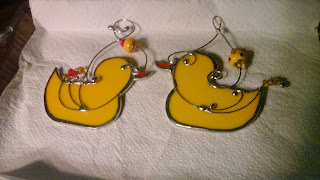 My customers would "Ohhh" and "Ahhh" over them, pick them up, say "How cute is that?" then walk away and not buy them. (Update- They were eventually used as door prizes for a couple of events and found good homes.)


Then there was my "Garden Buddies". This was a collections of what I thought were cute, whimsical creatures you might find in your garden or yard.
Who wouldn't like a cute little Bunny or a funny little Frog?

Apparently everyone. These poor guys hung on my display grid, show after show after show. I eventually sold one frog, and shortly after that, sold a yellow Bunny         (I think that one was around Easter). But the rest were left to languish, watching the butterfly's, dragonfly's and other pieces being picked up and taken home. (Update - The rest of the Bunnies and Frogs found loving homes as gifts and donations to the many animal organizations that I support).


And lastly, there were my very recent "Hopes & Dreams" trinket box's. As I said in the beginning, I only make a 2 or 3 of a new design to see how they will sell, but the box's, well I was so sure that they would fly off my shelf's, I made 8 of them. 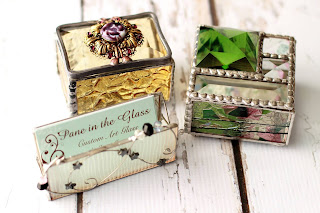 I even had my photographer use them in my promotional photos for 2015/2016. Unlike sun catchers that hang on my display, the box's took up a lot of table real estate. And again, customers would take the lids off, look inside, then put the lids back on and move along. I did eventually sell most of them, but only after I put them on sale for 1/2 price.
(Update - I just found one more box that I had cut out and that is ready to be assembled).

It seemed like a good idea at the time.

Other Artists and Friends